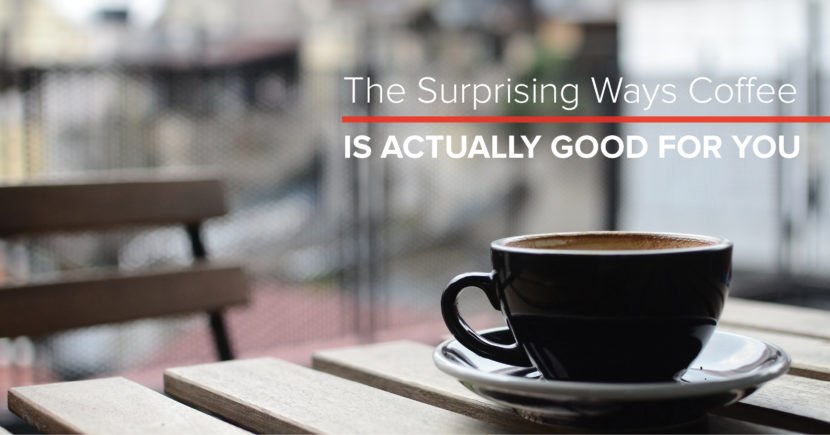 The Surprising Ways Coffee Is Actually Good For You

It’s not often that we come across someone that isn’t coffee-obsessed. It appears as though majority of the population have been hooked since their first sip of the glorious, dark, caffeinated liquid (and we can’t blame them!). So, what happened to the others? You know who we’re talking about, the ones who strictly drink green tea and probably don’t eat carbs either; the ones who are somehow surviving without some form of caffeine flowing through their veins. We’ve discovered that coffee has developed a bad reputation amongst those who are conscious about their health, but we’re here to tell them the surprising ways that coffee is actually good for you!

1. It’s basically an elixir of immortality (kind of)
Coffee is actually full of antioxidants that protect your body and mind from damaging chemicals that could play a part in your longevity. For those aged between 50 and 70 years old, coffee plays a significant role in decreasing the risk of death due to serious illness or disease.

2. A metabolic boost
If you’ve tried any over-the-counter weight loss medication you’ve probably noticed the presence of caffeine in all of them. This is because coffee has been shown to increase metabolism by as much as 11%.

3. It relieves pain
Coffee has a mild tranquilising effect on us that has been compared to morphine in some cases. It also aids in alleviating stress, which will help you feel better as well.

4. You can become a pro at memory games
Coffee is known to help improve short-term memory, so the next time your nephew challenges you to a game of Snap you’ll only be letting him win instead of actually losing.

5. Good moods all round
That warm and fuzzy feeling you get after drinking a cup of your favourite coffee isn’t something to ignore. Those who drink coffee are as much as 20% less likely to develop depression.

If you haven’t got a cup in your hands right now we’re not sure what you’re waiting for. Order a bag of your favourite West Coast Coffee here.

For international orders, please place your order directly with us at sales@weskuscoffee.co.za